History of Mineola – The “Friendly Village” 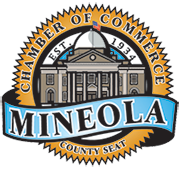 Mineola’s rich and colorful history brings the past and present together. The Algonquin Indians who gave this vast plain its name first inhabited Mineola. Two of the remaining evidences of the Indians presence here are their old paths which we now call, “Jericho Turnpike,” and, “Old Country Road.” These original inhabitants gave the present dwellers the main lifelines of this community.

Mineola is part of the land Henry Hudson claimed in September 1609 for the Dutch East India Company. The first settlers who arrived in 1637 were farmers. They called this area “Hempstead Plains.” The town grew slowly with little documented on it until 1844. At this time the first post office was established and the town was then named “Hempstead Branch but was most referred to it by its nickname – “The Branch”. On June 12, 1858, “The Branch” was officially named “Mineola.” The name was derived from the Algonquin Indian word “Meniolagamika” which means “a friendly or pleasant village”.

MINEOLA, TEXAS – There is a town in Texas called “Mineola” that was named by a railroad employee whose job it was to name towns that had no names as the railroad was putting stations in during its expansion throughout the West. This employee was homesick for his hometown, Mineola New York, so he liked this town and named it after his hometown. This is a true story and is in the history records of Mineola, Texas.